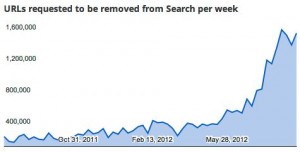 Google’s Transparency Report for Copyright Removal Requests has been an interesting opportunity for outsiders to peek at the process of who is filing DMCA notices and against what.

However, a quick glance shows that the number of URLs removal requests has been skyrocketing in recent months, now up to over 1.5 million per week from just 400,000 per week in late May. It seems as if the number of DMCA notices being sent to Google is skyrocketing and, to some degree it is.

But the truth is a little more complicated and after talking with several people who are very active in sending DMCA notices to Google, it appears that much of the rise in copyright notices to Google is the search engine’s own doing, at least in part.

But to understand that, we first have to know a bit about how to send DMCA notices to Google and the changes Google has been making.

The Three Ways to Send a DMCA to Google

It wasn’t that long ago, especially if you weren’t a major filer, that the only easy way to send a DMCA notice to Google was via a fax. However, years ago, Google began revising its DMCA process to include a simple, automated form and, finally, in 2011, began accepting form DMCA notices for all services.

Currently, there are three ways to send a DMCA notice to Google if you need to:

Of the three ways, the form is probably the one used by the most people but the backend is by far responsible for the majority of requests as the high-volume submitters are usually invited into the system pretty quickly, to streamline things both for the filer and for Google.

However, to answer the key question, it’s important to understand the difference between those three forms of submission and, in particular, focus on the backend method.

Yes, Google DOES Throttle DMCA Notices (In a Way)

The three separate methods and the similarities between the second and third explains the confusion that happened last May when the RIAA posted about how there were throttles placed on the number of notices they could file per day and others, like Ars Technica, said the form didn’t have any such limitations.

The truth is that the form itself doesn’t place any restrictions on the number of notice other than 1,000 URLs per works and 10 works per form. That means you could, theoretically, file 10,000 URLs in one form and you can send as many forms as you want.

However, most high-volume filers use the invite-only backend and that, in turn, is throttled.

Companies that send notices via the backend do have a limit on the number of notices per day they can send, at least via that method, and the amount according to at least one source, is fairly arbitrary with some companies having more than others and companies often jockeying to have their rate limit increased.

Because, as large as the amount is for most companies, many, if not nearly all, are operating with a huge backlog of notices, sometimes several months deep, some of it likely from before Google’s policy changed. This backlog also likely plays a role in why some companies are sending notices regarding dead sites. The sites were likely alive when they were added to the list but went down before they could actually be filed.

Google, however, has been working to alleviate that some and has been slowly increasing the throttle on the companies that are maxed out, enabling them to send more and more takedown notices per day via the backend.

In short, the skyrocketing number of removal requests probably represents not an increased effort by copyright holders to find and file against more links, but in Google opening up its backend to process more and more notices and major filers clearing out a backlog.

But Why So Many Google DMCA Notices?

All of this leads to a final question about why are there so many notices being filed with Google in the first place.

As most people who read this site know, I’m not fond of sending DMCA notices to Google, making it literally the last step in my process for dealing with infringement

I don’t have access to the invite-only backend and haven’t sought it out because I file so few notices with Google. As a result, when I do, I have to use the Web form.

But why are so many others sending such a large volume of notices to Google? There are many reasons but it’s largely because they have a large number of files and URLs they can’t remove directly due to uncooperative hosts. Also, sending notices to Google, especially via the backend, is just easier and faster, even with its limitations.

But one of the bigger problems is that it’s incredibly easy to create a new webpage or a new URL for an existing page. Meaning a lot of very popular sites simply move the same content around to slightly different URLs. Many, in fact, automatically generate URLs for searched-for items, feeding a steady stream of new pages (often garbage ones) into Google.

This, in turn is likely a big part of why Google opted to create the “Pirate Penalty” as they were receiving a large number of DMCA notices against the same sites and, largely, the same content.

This also highlights that the wave of DMCA notices against Google is as much an anti-spam operation as an anti-piracy one. Copyright holders, more than wanting to make sure their works aren’t pirated, want to ensure that legitimate versions of the content turn up first in the results so potential customers go there.

While the number of DMCA notices being sent to Google is skyrocketing, it’s not because of a huge spike in piracy, a change in tactics by copyright holders or some shift in detection. It’s simply Google opening up its backend to more and more notices.

That being said, it will be interesting to see what, if any, impact the Pirate Penalty has on the number of notices filed with Google. Will more do it hoping to punish infringing sites? Or will fewer notices be filed once several key domains are (likely) bumped down in the results? Those are tough questions that I don’t have answers to.

In the end, when it comes to DMCA notices and Google, it’s clear that we live in a very strange and interesting time. There’s going to be a lot of development in this area over the next year and Google’s Transparency Report will continue to be a page worth watching.