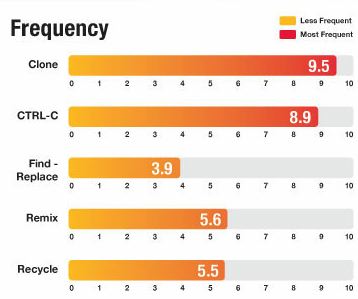 Recently, plagiarism detection service Turnitin performed a survey of some 879 educators in a bid to understand what kinds of plagiarism were the most common in academia and, equally importantly, which were viewed as being the most problematic.

In a recent whitepaper posted to its site, Turnitin reported on the findings of its study and laid out what the educators said along with some analysis of their own.

The results were not shocking, but still provided a great deal of insight into both how educators view and treat plagiarism as well as what students are actually doing.

So what did the survey find? I’ve included some of the highlights below.

What the Survey Says

The survey first attempted to identify the different types of plagiarism that are common in academic settings Specifically they broke it apart into 10 categories, as defined below in the order of the type with the greatest intent to the lowest intent.

The instructors were then asked to rate the various types of plagiarism in terms of both how often they see the plagiarism and how problematic it is (both in terms of discipline and effort required to locate).

From this information, Turnitin wrapped up the report by making three recommendations for educators. Those are:

All in all, the results and the recommendations probably won’t come as a surprise to many, but there is still a few things worth looking at deeper.

My Thoughts on the Survey

In general, as I said above, I didn’t find too much surprising. Clone plagiarism, as the survey calls it, is definitely both the most problematic and the most common. At the end of the day, most cases of plagiarism are still just matters of copy and paste.

The prevalence of “Mashup” plagiarism was interesting and shows that there a large number of students who are not simply copying and pasting what they take. This kind of plagiarism lends itself both to cheaters who are trying to circumvent plagiarism detection and students who simply don’t understand how and when to attribute the works they use. It can be very hard to tell the difference in these cases.

Also interesting was the prevalence of “Recycle” plagiarism (fifth on both lists) as it is thought by many to be a rare phenomenon for a student to simply reuse content they had created previously. This hints at the idea that many educators may want to get more creative with their assignments and focus on crafting tasks that are more plagiarism-resistant.

I also largely agreed with the conclusions of the whitepaper. I’ve written before that the way many schools take plagiarism as a one-size fits all discretion is hurting the fight against it,

Also, guiding students and bringing them into the plagiarism checking process are both common-sense ideas to reduce plagiarism, especially accidental plagiarism.

For example “Clone” and “CTRL+C”, to mean mean the same thing since CTRL+C is the command to copy (exact words). Likewise “Mashup” and “Remix” mean similar things online though, in this study, they cover two very different types of plagiarism. Finally, I don’t know if “404 Error” and “Re-Tweet”, both of which are Web terms, are great analogies for the type of accusations (or would be widely understood by many educators).

However, that’s a very minor quibble in general as the break down of the actual types of plagiarism was still very good and the results very interesting and useful. For what was a very small survey, it answered some tough questions and got some very interesting data.

In the end, the study didn’t have many surprises but the few it had were interesting and its breakdown does provide a good jumping-off point for future conversations about plagiarism and academic dishonesty.

In short, it’s an important survey and whitepaper for educators to look at and consider. As school lets out for the year and educators begin to prepare for the next semester, now’s a great time to reconsider the approaches schools take to plagiarism and if, maybe, their policies don’t mesh with the realities of what is going on.