When it comes to copyright issues, photographers and other visual artists often have it much worse than others. Photography is easy to take, difficult to track and, depending on how it’s used, difficult to resolve cases of misuse.

A combination of copyright infringement, increased competition and the large amount of free images available on the Web legally have combined to make things very difficult for photographers who want to earn a living from their work.

To respond to these challenges, photographers and companies that support them are seeking out new approaches to doing business and Scoopshot is one such company. This Helsinki-based company thinks it may have an approach that photographers can use to earn money from their work and it starts with a free iPhone app and a global workforce of photographers. 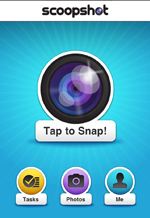 There are two major ways a photographer can use Scoopshot.

First, amateur photographers can download the Scoopshot app for either their iOS or Android device and then take pictures of newsworthy events or other things publications might be interested in. You can then set a price for the photo and upload it to the site. The photo will be available for sale for 48 hours before it will rotate off.

Second, more professional freelance photographers can upload a portfolio to the site and get themselves hired by publications seeking photos. For example, a newspaper in one country could hire a photographer in another rather than either using wire photos or other stock images.

Both professional and mobile users can respond to various tasks posted by publications seeking specific images.

For journalists, the service works one of three ways:

In the end, the main goal of this system is simple: Bring together people with cameras who are in a position to take photos of interesting things and the people who might want to buy those photos. This is done in an enclosed ecosystem that both minimizes copyright infringement and ensures a (relatively) unique product.

This is in stark contrast to the more open ecosystem most stock photo sites offer, where anyone can view and browse images, including those who might be looking for free images to just take.

In short, Scoopshot offers a private, simple and streamlined way for photographers and buyers to interact and trade early publication rights before the larger Web sees the image and begins to spread it far and wide.

However, it doesn’t solve a lot of the critical problems that come with being a photographer and it isn’t a perfect solution, leaving a few critical gaps in the protection it gives photographers.

Scoopshot has two fairly sizable limitations that photographers need to be aware of if they choose to consider it.

These limitations are, most likely, acceptable to photographers who mostly do photojournalism. In many of these cases, there’s no market for an image after 48 hours so the infringements of it past that point don’t matter. But those who have work that has value long after that window has closed will continue to face great challenges.

In short, this is meant for photographers such as Matti Matikainen, who found a photo he took of Teija Vesterbacka, the wife of Rovio founder Peter Vesterbaka, who was wearing an Angry Birds-themed dress. The photo spread like wildfire, even appearing on several major news outlets, but only handful sought permission and only one paid a licensing fee.

Photographers focusing on more artistic work or that are creating content more in line with traditional stock photography, photos that have a longer shelf life, likely won’t see much benefit from Scoopshot.

That being said, it is easily imagined an invite-only stock photography platform that would work much the same way but without the 48-hour limitation and targeted at larger media buyers rather than just journalists.

However, that system would also not be able to deal with the images after they were legally purchased and it is difficult to say if such a system could be viable as it would require a large number of purchasers. That being said, some services do provide something like this, but usually by acquiring all rights to the images involved and selling them to clients as a complete library, rather than piecemeal as with Scoopshot.

All in all, Scoopshot is an interesting idea but it’s by no means a silver bullet. Though the company has done some €112,335.94 ($148,000) in business with 33 publications, it’s not yet a large enough player to make a major dent in the photo market. Also, with most of its clients situated in the EU, specifically Finland, Sweden and neighboring countries, there likely won’t be much those outside of the region can do with it (though they can participate).

In the end, the idea is fairly promising and the model that Scoopshot follows, the one of an enclosed marketplace, may be of greater importance to photographers in the years ahead, but it won’t solve anything by itself.

As with most great ideas, it’s just a piece of a larger puzzle, but it is a piece that many photographers should be interested in.