Registered Commons, a non-repudiation service that, while not an official Creative Commons partner or affiliate, has closely integrated itself with Creative Commons, recently announced a series of updates to its service that it hopes will help it compete with other players such as Safe Creative and Myows.

The service, as with most non-repudation services, works by time-stamping works uploaded to it and storing information about it including a hash of the work, the author and license information. This information, in theory, can be used if a legal dispute arises over the work, especially outside of the U.S. where there is no formal registration system.

However, RegisteredCommons still lags behind other non-repudation services in several areas. But, with it’s new update it does introduce a new feature that may grab the attention of those who routinely use or license works under Creative Commons licenses, especially those who mix CC licenses with commercial use.

Whether it will be enough to help RegisteredCommons compete in a very tight marketplace will remain to be seen, but it could be a revolutionary idea that could have an impact far beyond Registered Commons itself.

In an email sent to its users, RegisteredCommons outlined three new features and changes to its service, including:

Of the three it is likely the third feature that will garter the most attention. Though it’s a system somewhat similar to crowdfunding systems that have been popular with novelists and filmmakers for a while, it is unique in that, instead of a crowd putting up funds for the release/creation of a work, an altruistic person is buying rights to the content both for themselves and for the public at large.

But will the idea take off? It’s very difficult to say.

The idea (and name) for Buy4Commons dates back to at least 2008 where it was discussed on mailing lists for Creative Commons. Though the idea there is somewhat different as RegisteredCommons implementation only has the public option, not choice of a public or private one, but the idea is largely the same.

On that front, RegistredCommons implementation of Buy4Commons is fairly straightforward. You simply visit a work that you’ve already licensed through the service, visit the “More Permissions” heading, select “Buy4Commons”, set a price and set a comment to the license if you wish. It takes all of a few seconds and, if someone does purchase the license, the RegisteredCommons page will change to reflect that, changing the license for everyone. 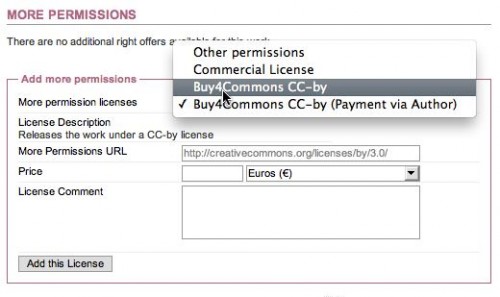 However, the question is how well-used this system will be. Unfortunately, CC+ doesn’t seem to have gained a great deal of traction (at least not that I’ve noticed) and I don’t see how Buy4Commons, with a much higher price tag, will fare much better.

Still, I could see some limited use of this concept, such as with novels or larger works that people might want to pay money to place them in the commons. However, those projects would likely require the support of crowdfunding operations, such as ChipIn, to be truly viable.

In short, what Buy4Commons may be best at is merging the worlds of crowdfunding and Creative Commons, however, it’s unclear if there’s a need for a formal regime for such a merger or if there’s a large market for such a system as it is.

I haven’t written a great deal about RegisteredCommons over the past few years because, quite frankly, I haven’t heard a great deal from them. I first wrote about them in 2006 and included them in a comparison of services in 2009.

To me, RegisteredCommons has always been difficult to use, feature-limited and expensive (€99/year for unlimited uploads). Safe Creative and Myows both offer additional features, are easier to use and have more than usable free accounts available. Of the new features introduced today, Safe Creative has long had GPL as an option (along with other related licenses) and can handle sales and licensing internally.

The only new interesting feature, Buy4Commons, likely has a limited use and can be easily emulated across other non-repudiation services. It may be an interesting idea, but it isn’t enough to help RegisteredCommons stand out in an already crowded field.

At least, not when so many of their competitors seem to already be so far ahead.