It’s something of a constant in my line of work, whenever I help someone file a DMCA notice or even encourage them to do so, I notify them that there is at least a chance the notice could appear in Chilling Effects.

Usually people blow this off but more than a few have gotten very upset at the prospect. Some have even refused to file notice because of the (at times remote) possibility it could end up there.

Though I’ve always tried to calm frayed nerves and assure people that Chilling Effects is no reason to give up on your rights, I haven’t always won these discussions. But while I do understand that some would be upset at the potential public disclosure of a private disagreement between a person, an alleged infringer and their host, there is much more to the story.

Personally, I don’t fear Chilling Effects. Though I do have some gripes with it and some suggestions for improvement, the possibility of my notices ending up in their database has never once bothered me.

There reasons are actually very simple.

What Chilling Effects Does 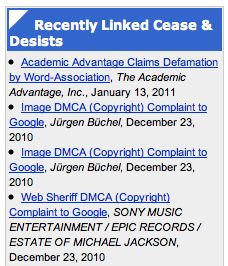 This is because Chilling Effects relies on hosts (or others involved in the process) to send them the notices. They have an arrangement with Google where nearly all notices sent to them are forwarded, including those sent to Blogger. As the largest search engine and by far the largest Chilling Effects partner (though Digg and others do participate), most of the notices in the database relate to Google one way or another.

Before publishing a notice, Chilling Effects removes sensitive information such as addresses and phone numbers to ensure privacy. It also categories the notice, links critical elements in it and affixes any relevant FAQs. The goal is to remove personal information but also make the notice easier to understand for those not accustomed to the legalese that often comes with them.

The result is a page like this one, with both the notice and the relevant information about the law, easily searchable and linkable.

Why This Doesn’t Bother me

When you file a DMCA notice, you are essentially filing a a legal notice telling a host that content on their servers is infringing your copyright and you are demanding it be taken down. There is a very large burden there on you, both ethically and legally, to make sure that your notice is proper and correct.

If you are ashamed of the notice or are uncomfortable with public scrutiny of your actions, you should probably not be filing the notice in the first place. Chilling Effects is not an attempt to shame copyright holders who are filing legitimate notices, but to keep a record of notices filed and discourage the use of the DMCA (and other laws) in silencing legitimate speech.

If you filed a lawsuit, you would have almost no expectation of privacy as the lawsuit becomes part of the public record almost instantly. DMCA notices, however, have no such public record. Since Chilling Effects remove sensitive information, it actually provides greater privacy protection than litigation and, considering how many notices pass through the site every week, it’s unlikely anyone will notice or care about your filing unless there is something seriously flawed or controversial about it.

And that seems to be the nature of Chilling Effects today, most of the notices are mundane. The recording industry is the largest filer (certainly not having let Chilling Effects stop them) and nearly all the notices filed seem to be proper and non-controversial. As a result, they simply fall off the radar.

In short, a DMCA notice appearing in Chilling Effects, as long as it is proper, is only a big deal if one makes it a big deal. Though mistakes do happen and I have seen at least one occasion where personal information did make it into the database, that information can be removed easily by contacting the site.

While I certainly have a lot of respect for what Chilling Effects is doing and don’t mind my notices appearing in it, there are two minor gripes that I have with the service and I they are gripes I’ve heard echoed by other filers.

First, the name Chilling Effects, to many copyright holders, sounds very accusatory. Though Chilling Effects “aims to support lawful online activity against the chill of unwarranted legal threats” it does so by being an impartial database of notices. Not every notice in Chilling Effects is “chilling” free speech in any way, in fact, the vast majority are not.

Many copyright holders, when they find out their notice has appeared in the database or that it might, think that someone is telling them they did something wrong, even if it was a completely legitimate exercise of their rights.

As a guy who blogs at Plagiarism Today, I understand well the unintended consequences that names can have, but a more neutral name might encourage more copyright holders, especially smaller ones, to cooperate with the database (that and an easier submission process).

Second, a problem I’ve seen with both Digg and Google Search notices is that Chilling Effects will post the full URL the content that was removed from the index. Since both sites, understandably, link to the Chilling Effects page, this has the effect of making the full URL, without obfuscation, available to anyone, defeating the purpose of filing the DMCA notice.

The only difference is that, instead of clicking the link directly in the Google results, you click the link to the Chilling Effects notice and then copy and paste the URL. This left some of my clients and friends confused and wondering if Chilling Effects was trying to sabotage their legitimate DMCA notice.

This problem could be easily fixed by obfuscating part of the URL involved in these cases, making the full content only available for host takedowns where the work itself was removed.

Though I don’t think the Chilling Effects process is perfect, I’ve never once hesitated on sending a notice because it might appear in the database. Simply put, I’ve never once sent a notice I don’t believe in or would feel embarrassed by it being made public.

That being said, very few of my notices have made it into their database. Much of this is because I rarely send notices to Google, instead preferring to send them to hosts, the majority of which don’t send their notices to Chilling Effects. But even the notices I do send to Google don’t seem to appear and I’m not sure why.

Regardless, I wouldn’t mind if they did and I don’t think any creator who is filing legitimate takedown notices should mind either. What Chilling Effects is doing is important. By discouraging bad uses of the law, Chilling Effects is making it a better climate for those who want to use it legitimately and it is also keeping records of notices that may enable future research and evaluation of the law.

In short, copyright holders filing legitimate DMCA notices need to support Chilling Effects the same as those who fear false notices. It’s important to remember that a DMCA notice is a legal dispute and, if you aren’t prepared to have a legal dispute aired out somewhat in public, you probably need to rethink your position.

There are some exceptions, obviously, but in most cases the copyright holder isn’t harmed at all by the notice being made public with sensitive information removed. However, the public can gain a great deal, especially if a database is large enough to help researchers understand how the law is being used and others how to apply it correctly.