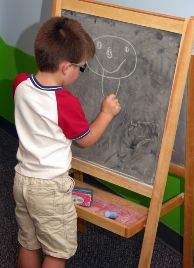 A recent study by Kristina Olson and Alex Shaw from Yale attempted to discover the approximate age in which children begin to believe that plagiarism is wrong.

The study showed children between the ages of 3 and 11 “videos and puppet vignettes” about that featured art students. In one of the videos, two students came up with their ideas independently and, in the second, one student copied his work off of the other.

For psychologists, the question of plagiarism is an interesting one as children have to understand many different concepts to understand that plagiarism is wrong, including, according to the article, “that not everyone has access to all ideas, that people can create their own ideas and that stealing an idea, like stealing physical property, is wrong.”

As an anti-plagiarist, I find the results interesting for several reasons:

I don’t have any easy answers to the questions raised but I do find this study to be valuable in understanding the bigger picture of plagiarism and, possibly, understanding how to better combat it.

Hopefully this study will not only lead to a better understanding of child psychology, but also of plagiarism specifically, enabling academics and other creatives to better address the problem.