However, in terms of content and copyright issues, the White House site is almost a polar opposite to the challenges that others face. Where most Webmasters have to find a way to balance the rights they want to give away vs. the ones they are willing to surrender, most of the content on the White House site is already in the public domain, by virtue of it being created by the U.S. Government.

That surrendering of rights is furthered even more by Obama’s promises to run a more open administration and present a “Google” government, something his site would likely represent.

But even though the site is far from a finished product (it is only a few days old), many of its policies are already in place. Though it is likely too early to really grade how “open” the Obama WhiteHouse.gov site is, we can still get an idea of some of the steps that his Web team is taking to ensure that it is as “Google-Friendly” as possible.

Here’s what I found.

Obama’s Web site follows protocol of most of the Web and has a “Copyright Information” link in the footer of the site. The copyright policy is very short and sweet, first clarifying that all work produced for the site is in the public domain, including what that means, and then informing users that anything they submit to the site is licensed under a CC-BY license, making it available for reuse with attribution for any purpose.

The second part of the license is a very brief DMCA policy that, as the law requires, informs users that they respect the intellectual property of others and will terminate the accounts of repeat infringers. Though it is unclear how that applies with this site, it meets the requirements of the law as I understand them.

Overall, I am very impressed with this policy. Not only does it plainly state that the work of the site is in the public domain and offers a clear, practical explanation of what that means, but the site also goes to great lengths to ensure that works by others posted to the site can be used freely as well, with only the minimal restriction of attribution.

The only issues I have with the copyright policy are that A) The policy does not actively link to the CC license in question, making it difficult for those unfamiliar with the license to read the terms of it and B) The DMCA information does not provide the contact to report any infringements. Though the latter does not strike me as urgent at this time (I can’t imagine what content one would file a notice over), it does seem an odd omission.

The new robots.txt file of the new White House site has already drawn a great deal of attention. It is a simple and beautiful file that allows search engines to index the entire site, save a folder entitled “includes”, which likely contains elements used to compile the site. Restricting search access to this folder makes sense as all data from it will be in other pages and, thus, allowing access would have created duplicate content.

If you’re gunning for openness and free access, it is hard to imagine a more perfect robots.txt file.

RSS is going to be an important part of any “wide open” and “Web-friendly” government site, however, this is one area the new White House site disappoints. Though the home page offers a collection of five RSS feeds you can subscribe to, only a few of them worked in my testing and all of the ones that do are heavily truncated, displaying only the first sentence of the post. 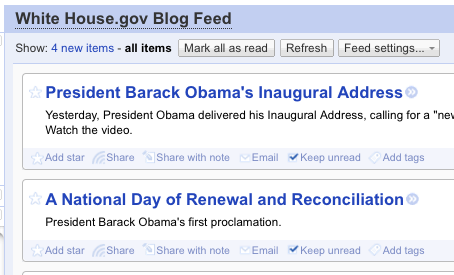 Both the AP and Reuters allow more of their content to appear in their RSS feeds.

In defense of the new site, it may be a limitation of the software they are using as their blog main page is also heavily truncated. This could be something they work on in the future. Also, one still has to give the site team credit for making RSS feeds such a critical part of their Web strategy and including so many of them.

That being said, I can imagine many were disappointed to subscribe to the blog feed at the White House and discover that it was a very partial feed.

I was surprised to find that the video on the site is hosted by YouTube and all of the videos can both be embedded freely into other sites and downloaded in high resolution format. The White House even has its own YouTube channel, currently with only three videos.

All in all, it is an impressive effort to both make the content available freely and to put it where people already are, rather than hiding it on sites people rarely go to.

Though not directly a part of the openness of the site, two-way communication or at least a chance for visitors to talk back to the site is an important part of transparency for many bloggers. Unfortunately, the current White House site does not allow comments on its blog at this time.

However, one can hardly fault the Web team for that. If you read the comments on the YouTube videos, you’ll quickly see why they might want to prevent users from commenting publicly.

Unfortunately though, even the site’s email contact form seems needlessly limited. It asks for, though doesn’t require, a great deal of personal information, including phone and address, and then limits the action email to a mere 500 characters, roughly the length of 3.5 Twitter tweets.

Though, again, it is hard to fault the administration for not wanting to open up their inbox to every person with a long-winded rant, Dominos Pizza gives you 1000 characters when filing a complaint.

Though it’s tough to give an overall average as the elements above can not and should not be weighed equally, the feeling I get is that the administration, so far, has earned a solid B+. There is room for improvement, but the work has been very solid over all and I am very impressed with the progress that has been made.

No matter what you may think of Obama’s political views, it is clear that his administration has taken some great steps to be more Web-friendly and be more open onlne. Not only does its Web presence offer an easily-searchable site with a solid copyright policy, but it is working to share its multimedia content broadly and put it where it can be found.

Though there are some weaknesses, namely with the RSS feeds and the contact forms, such hiccups should be expected so early into a site launch. The fact that it has come as far as it has in the short time that it has is very impressive.

The Obama administration is already well on its way to being the most Web-friendly in the short history of the Web. I really like what has been done so far but would like to see it improve and grow in the coming months.

A lot of good work has been done but there is still more to do if one truly wants the most open experience possible. Fortunately, I think we’ve seen more than enough “good faith” from the administration to assume that they are working to make that happen.

Needless to say, no matter what happens, the whole of the Web will be watching.