Last week I covered AbouThiSite, a mashup that was designed to take a domain and give the user a variety of information on it including traffic estimations, PageRank and more.

But while AbouThiSite was interesting, its data is woefully incomplete, forcing me to continue relying on other sites for most of my information.

However, long-time reader Voyagerfan5761 alerted me to a similar, though more complete, service that had flown under my radar. The service, Quarkbase, promises to provide “Everything About a Site” and to be everything I wanted AbouThiSite to be.

So, I excitedly gave the site a whirl and learned quickly that it is a huge step in the right direction, but not quite the endgame I was hoping for.

Quarkbase works very similarly to other sites in this field. Users either punch in the domain they are interested in or use their bookmarklet, to pull up information from dozens of resources about the domain a site is hosted on.

That information is then broken up into seven different categories, which can either be scrolled through on the default “All” page or quickly selected via the tabs at the top. Those sections are as follow:

Quarkbase is able to do this by bringing together information from a variety of sources including Alexa, Zoominfo and more.

The result of all of this information is that the results page is extremely large and, at times, slow loading. The initial page is also very cluttered, though the tab feature makes it much easier to cut to what you need.

All in all, the information that Quarkbase provides is very robust and very simple to use, however, there are a few hiccups that prevent me from making this service my default. 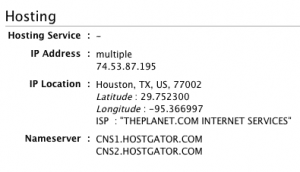 The biggest issue I have with Quarkbase is that the information, in particular in the Technical section, is questionable at best. For example, when looking up Hostgator’s main site, the site doesn’t even fathom a guess as to the hosting provider. It correctly guesses that the ISP is “THEPLANET.COM INTERNET SERVICES” but even that is not completely accurate as Hostgator is its own host, just using ThePlanet’s servers.

This was an issue that has tripped up other services, including Domain Tools, and prompted a fix from WhoIsHostingThis. During many of my tests, Quarkbase refused to even guess about the host information, instead just leaving that line blank, and the ISP information was dubious at best.

Other information on the service was unreliable as well. Alexa’s traffic data is notoriously unreliable, though still an understandable choice under the circumstances. Also, information in the “Introduction” section is routinely either left blank or inaccurate, especially the contact information on non-company sites.

This limits the usability of the service, especially when competing sites such as WhoIsHostingThis have largely overcome many of the same challenges, but it still remains one of the most complete overviews of a site or domain that you can get, even with the hiccups and speedbumps.

Quarkbase is far from perfect, but what it does it does well. Though its results are not as technically-oriented as Domain Tools or as accurate as WhoIsHostingThis, its sheer breadth of data makes it great for a “quick overview” of a site’s information.

Though I again don’t think Webmasters and bloggers will get a lot of use from this tool when chasing down scrapers and plagiarists, especially since the site does not do subdomains at this time, it could provide some assistance with directly contacting infringers, locating the host and learning about the background of a site before moving in.

If nothing else, it might be worth seeing what Quarkbase turns up on an infringing domain just to see if there is anything you were unaware and can use, such as an email address or contact form.

I can pretty much promise you that you will learn something about every site you punch into this service, the question is how accurate and useful will that information be.