Update 4/20/2010: Flickr appears to have rectified this problem and is now showing EXIF data on both original and reduced sized versions of the images uploaded through the service. A follow-up article is pending.

Though the orphan works bill has been defeated for this year, there is still a tremendous amount of interest among visual artists about ensuring that their works carry their names and information with them. It is largely assumed that the bill will be reintroduced next year and that, at some point in the near future, that there will be a risk of their works becoming orphaned.

However, in the age of the Internet, photographers have also become more reliant on photo sharing services for hosting their work and their online portfolios. It has been an easy way to get their works online and find an audience.

Unfortunately, at least some of those services seem to be working against artists in keeping their works clearly marked. Though many routinely insert EXIF metadata into their images, at least two of the most popular image hosts, Flickr and Facebook, are routinely stripping that information out before posting the information online.

This could, should the orphan works bill passed, cause many photographers, including those that used due diligence in marking their work, to have their works become orphaned and used legally without their permission.

The worst part is that it is a simple fix on the host’s part, but also one that Flickr has been aware of for at least six months.

Back in April, photographer James Duncan Davidson posted a blog entry detailing an error with Flickr that caused copyright and other metadata to be stripped from uploaded and resized images. He also posted his observations to Flickr’s feature request forums, where it became a popular suggestion.

However, even after over six months of activity, the post has not gotten a single response from the Flickr admins nor has the feature been implemented. So, I decided to conduct an experiment to see if Flickr had quietly instituted the fix and also see if a few other popular image hosts had similar problems.

The results were very surprising.

To conduct an experiment, I took one of my snapshots from my trip to Newcastle, UK and added some very basic copyright metadata to it. To do this, I used the open source application Reveal for the Mac.

After I added the metadata, this is what was shown in the photo information. 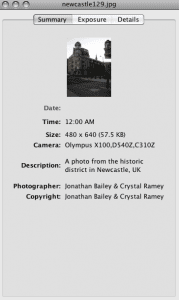 After uploading and re-downloading the displayed copy of the image, I noticed that the file size was significantly bigger but, once I opened up the metadata in Reveal, this is what I saw. 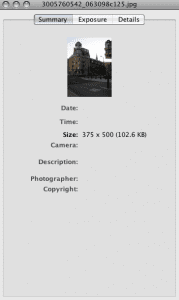 The new photo had completely stripped out the pertinent copyright information, along with all of the other metadata that I could see.

After that, I decided to try Facebook. With over 10 billion photos hosted, Facebook is the largest image host in the world currently. I did the same process with Facebook and, when I re-opened the metadata in Reveal, I saw that, again the information had been stripped out. 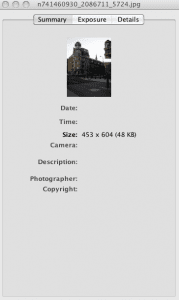 It was immediately clear that both sites strip out all image metadata. Though Flickr does make a point of reading and parsing much of it, especially information pertaining to the camera, before posting it, none of it is displayed on the versions that are public-facing.

Two that Preserve it

After being disappointed with Flickr and Facebook, I decided to try two other image hosts to see how they handled the metatadata. First, I tried a host that I have used in the past on this site, Imageshack.

With Imageshack, I did two checks, first I uploaded the image without resizing and then with a reduction to a “Web-friendly” size. I downloaded both versions. In both cases, the metadata was preserved. 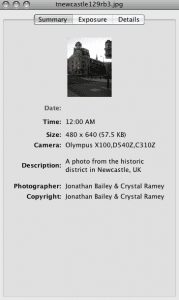 I then decided to try Photobucket, an image sharing service I continue to have many sharp disagreements with, taking a similar set of steps that I did with Imageshack. However, once again, both the raw and the version resized with their online software preserved the metadata perfectly. 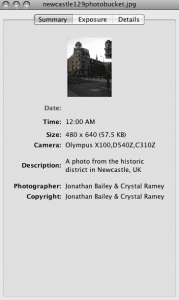 While I have many other copyright-related concerns regarding Photobucket, it is nice to see that their system does handle this one issue correctly.

Still, for photographers, these results leave a lot of uneasy questions to be answered.

What Can Be Done

The problem with the results above is that neither Photobucket nor Imageshack are widely used by professional or even amateur artists. They are much more common as image hosts for blogs or social networking sites and host a lot of personal photos as well as more than a decent amount of copyrighted work.

However, there are a lot of photographers and artists putting their work on Flickr to share it or using Facebook as something of a personal resume. In those cases though, any metadata that they are adding is being stripped out before at least most of the images go online.

The onus, right now, is on these services to fix this problem but there seems to be very little push to do so. As such, the only way to ensure that your copyright information is carried with the works you submit through these services is to make it part of the image itself, most likely through some form of visual watermarking.

Until these issues are fixed, artists have to assume that any image posted on Flickr or Facebook will be passed around the Web with no identifying information, greatly increasing the probability that they could become orphan works should the bill pass.

Sadly, these aren’t the types of issues most image hosts think about when designing their product. They worry about providing a good user experience, giving enough space, having enough features and building a good business plan. Whether the metadata is preserved, is not a major issue from their standpoint.

However, to me, these are the types of small details that can have a big impact on artists and separate the great image hosts from the good.

Though Flickr has made a great reputation as a place for artists and photographers, it has shown a lot of disregard for their rights. From snafus with the API to confusing licensing terms, Flickr has been anything but an oasis for artists concerned about how their work is being used.

If the orphan works bill passes, these issues will go from being minor inconveniences to major concerns and all image services are going to have to address these problems, one way or another.

However, the time to start thinking about these things is now, before the law passes and a potential crisis is at hand. Waiting until the law does pass could be too late.