One of the greatest challenges facing artists when it comes to protecting their work is finding infringements.

This is difficult because search engines, including image search engines, are designed to look for text, not pixels. Though you can look up the title of an image, the filename or even metadata within the image, if that information was changed by a site reusing your work, it has traditionally escaped detection.

Though the technology has existed in various forms, there has never been a search engine available to the public that could take an image and look for other ones like it. That is, until Tineye.

Tineye works differently than any other image search engine. It doesn’t ask you for words or even a description. Instead, you upload an image and it returns results similar to that picture. It is fast, easy to use and, most importantly, effective.

However, there are limitations to Tineye, especially in its current form. Though artists have many reasons to celebrate, the dancing likely won’t commence for some time.

For the purpose of this demonstration, I am going to use a standard Google Logo, specifically, this image:

First, after accessing your Tineye account, you upload the image from your computer to the service.

Tineye then converts the image into a fingerprint and begins matching that fingerprint against others in its database, which currently has over 700 million images.

After it is done, Tineye returns the results, starting with the images most similar to the one you submitted, for example, the image to the left. In this case, Tineye found over 3000 matching images, the first one being an exact copy of the image I had used. 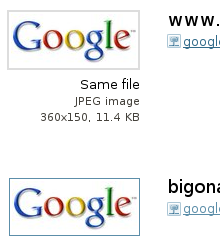 However, the real magic of Tineye is not in its ability to detect images that are identical, but to detect those that are similar, but altered. This includes images that have been resized, cropped, edited or otherwise changed. As long as enough of the original work is left behind for Tineye to understand what it is, it can report the altered version.

As you can see below, in a screen capture from page 23 of the results, that often includes very heavily altered versions of the original work. 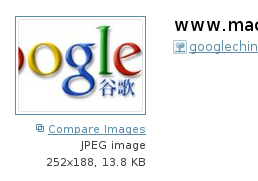 In addition to helping you find altered version of your original image, Tineye also helps you see what was changed. For each image you see, you’re able to do a comparison where you can flip back and forth between your image and the one on the Web, noting both similarities and differences easily.

Also, from the search results, you can visit the URL the image is located on, making it easy to follow through and, if appropriate, take action against any infringement.

The site also offers a Firefox/IE plugin that allows users to perform Tineye searches from any page on the Web, thus eliminating the need to download the image first.

Why this is Important

To be fair, Tineye is not the first to attempt and succeed at this kind of matching. Other companies, including both Digimarc and Picscout, have long offered similar matching services that work without text.

However, Tineye is the first to offer a robust image matching service that is free for everyone (at least as of this writing) and is simple enough to use so that artists can take advantage of it on a whim. There is no watermarking, no technology to apply to your images, just a simple upload and search.

As I see it, this has three potential implications that are both very large and very welcome:

In short, Tineye can help bring visual artists up on par with writers in tracking their content and being able to have their work easily searched. For this reason, Tineye has already garnered several big name clients, including the Associated Press, Digg and more.

Of course, as with any new service, there are limitations to how effective it is. However, in Tineye’s case, those limitations appear to only be temporary and should be fixed as the service grows in size and adds features.

In short, Tineye is not the system artists have been waiting for today, but it definitely has the potential to be that system in the near future.

If Tineye can continue growing and improving its service, it can easily solve a problem that has had artists struggling to protect their work for well over a decade.

Even though Tineye is a great service with tons of potential, in its current format with the existing limitations, it is little more than a preview of what is to come.

Though you should definitely consider registering for the Tineye beta, if nothing else than to pass along your thoughts to the creators, you should realize that the searches you perform will, for the most part, be ineffective. That will hopefully change soon though.

But if you want to see what might be coming down the pipe, definitely check it out.